Guest Post 10 Bits of Wisdom from the Shoe Shine Guy 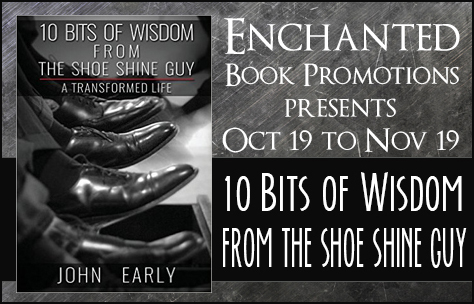 Title: 10 Bits of Wisdom from the Shoe Shine Guy

John Early worked in the corporate world for over 25 years. From the outside looking in, it seemed as though he had it all: the beautiful family, the magnificent home, the nice cars and great vacations, the fabulous income with the big 401k. He had what most would consider the American Dream. This was John’s idea of a dream, and this dream was all about him. Then suddenly, in an instant, like the Apostle Paul on the road to Damascus, John had an encounter with God that transformed his life forever. John takes the reader through that transformation and the total impact it had on not only his life, but on the lives of those around him, especially those closest to him-his wife and children. He lays out the 10 key bits of wisdom that were instrumental in reconciling and rebuilding those broken relationships. His road on this journey is paved with: Knowing your purpose, Character, Attitude, Goals, Teamwork and Trust, Respect, Courage, Regrets, Reconciliation, and Grace. This book shows all of us, no matter our circumstances or how dark our days may seem, that God is brighter still. Let God start to transform your life.

John moved to Houston, Texas in 1980 at the age of 21. He worked in sales for a manufacturers rep firm selling oil equipment. Sales territory was most of South Texas, driving 4000-5000 miles per month. John had the opportunity to call on customers that were located in remote areas of South Texas as well as the corporate offices of some of the largest oil and gas companies in the world located Houston, Texas.

He worked with Hantz Financial as a Vice President and financial consultant until December of 2010 focusing on marketing and client relationships. His team assisted high net worth clients with their tax planning, estate planning, investment strategies and business owner concerns. Providing advice to clients who needed sophisticated financial planning. While at Hantz Financial the company grew from 100 employees to over 500 and John was able to help build one of the largest practices within the firm.

In April of 2011 he created The Shoe Shine Guys. A mobile shoe shine service that started with an idea, one truck and a handful of clients. He now has three vehicles, a full service cobbler store and hundreds of clients. His company continues to add new clients every month and receive calls at least once a quarter about expanding to other parts of the country.

John attended Saginaw Valley State University. He has been married to his beautiful wife, Janet, for more than 32 years and they have two grown children, a son in law, and a grandson.

A sports enthusiast, John was an avid handball player for over 20 years (new titanium knee and work have sidelined him for a while) and was the Canadian national doubles champion in 1999.