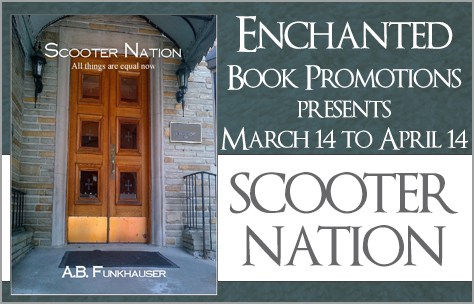 by A.B. Funkhauser
A funny thing happened after I finished the first draft of my first novel: colleagues told me I had to edit it and that editing was hard. Hmmm. I suppose anything can be made tough if you’re told often enough, but how about surprising everyone and making that alleged dreaded thing a zesty thought provoking experience instead?
Editing for me is not something that’s endured, but rather something that’s explored with curiosity backed by a genuine desire to learn more. Who are these characters and what’s all the fuss about anyway? After months of workshopping with the critique group, it is very tempting to tuck in and make changes right away. I resist the temptation. The notes I receive—good and bad—are given because I ask for them, and it’s only after a proscribed period of time that they become truly useful. I like to let notes percolate in a corner for a while before looking at them. I need distance to achieve clarity. It is only after a ‘cooling off’ period where the difference between what I thought was “great” and what the reviewer thought was “not so much” can be made sense of and I’m able to take the feedback for what it is: a resource rich tool that will 9 times out of 10 make my manuscript better.
Focus, like the cooling off period, is critical in editing. I never work on an existing manuscript alongside a bustling, sparkling new work in progress. Multitasking will turn edits into a mean old stepsister faster than you can say “ARGH!!!!!” and it will cost your princess plenty. I take the summer months to work on edits and only edits. Submitting the polished gem for publication is the reward at the end as well as the sparkling WIP waiting for attention at the finish line.
Organization is also key. We all have different methods that assist us along the way. Charts, diagrams, editing apps, Post It notes all over the kitchen cupboards all have merit. What I’ve embraced—what I’ll never let go of—is the practice of summarizing each chapter in a paragraph or two as I complete them. This does two things: 1) provides a seemingly instant synopsis at the end of round 1 that—yes—will need editing; and, 2) a faster way of getting to the crux of what the book is about so that it can be edited without the stress of a shaky ‘what happened next?’
So sweat not the process, dear writer. You have accomplished a great thing shepherding an idea onto a collection of pages in preparation for a waiting world. Editing will make this incredible accomplishment even more incredible as long as you give it the proper attention. You deserve it and so does your work.

Aging managing director Charlie Forsythe begins his work day with a phone call to Jocasta Binns, the unacknowledged illegitimate daughter of Weibigand Funeral Home founder Karl Heinz Sr. Alma Wurtz, a scooter bound sextenarian, community activist, and neighborhood pain in the ass is emptying her urine into the flower beds, killing the petunias. Jocasta cuts him off, reminding him that a staff meeting has been called. Charlie, silenced, is taken aback: he has had no prior input into the meeting and that, on its own, makes it sinister.

Toronto born author A.B. Funkhauser is a funeral director, classic car nut and wildlife enthusiast living in Ontario, Canada. Like most funeral directors, she is governed by a strong sense of altruism fueled by the belief that life chooses us and we not it. Her debut novel HEUER LOST AND FOUND, released in April 2015, examines the day to day workings of a funeral home and the people who staff it. Winner of the PREDITORS & EDITORS Reader’s Poll for Best Horror 2015, HEUER LOST AND FOUND is the first installment in Funkhauser’s UNAPOLOGETIC LIVES series. Her sophomore effort, SCOOTER NATION, is set for release March 13, 2016 through Solstice Publishing. A devotee of the gonzo style pioneered by the late Hunter S. Thompson, Funkhauser attempts to shine a light on difficult subjects by aid of humorous storytelling. “In gonzo, characters operate without filters which means they say and do the kinds of things we cannot in an ordered society. Results are often comic but, hopefully, instructive.”

Funkhauser is currently working on SHELL GAME, a contemporary “whodunnit” begun during NaNoWriMo 2015.

Other Solstice Books By A.B. Funkhauser

At last found, he is delivered to Weibigand Brothers Funeral Home, a ramshackle establishment peopled with above average eccentrics, including boozy Enid, a former girl friend with serious denial issues. With her help and the help of a wise cracking spirit guide, Heuer will try to move on to the next plane. But before he can do this, he must endure an inept embalming, feral whispers, and Enid’s flawed recollections of their murky past.

“Eccentric and Funny. You have never read anything like this book. It demands respect for the outrageous capacity of its author to describe in detail human behavior around death.”

“The macabre black comedy Heuer Lost And Found, written by A.B. Funkhauser, is definitely a different sort of book!  You will enjoy this book with its mixture of horror and humour.”

“This beautifully written, quirky, sad, but also often humorous story of Heuer and Enid gives us a glimpse into the fascinating, closed world of the funeral director.”

“The book runs the gamut of emotions. One minute you want to cry for the characters, the next you are uncontrollably laughing out loud, and your husband is looking at you like you lost your mind, at least mine did.”

“The writing style is racy with no words wasted.”

“For a story centered around death, it is full of life.”

“Like Breaking Bad’s Walter White, Heuer is not a likeable man, but I somehow found myself rooting for him. A strange, complicated character.”

Raw, clever, organic, intriguing and morbid at the same time … breathing life and laughter into a world of death.