Please welcome D.M. Cain to my blog. She’s the author of psychological thriller “The Phoenix Project” and she’s here today to talk about her editing process.

My editing process is a long and tiring one, but strangely I wholeheartedly enjoy parts of it (especially the early stages.)

I initially write my books using two methods. I spend a few hours a week sitting in cafes or restaurants with my trusty notebook, where I will hand-write sections of my story. It’s a bit old-school, I know, but there’s something special about cutting off from technology and getting back to basics with good old pen and paper. I often find that this is when my creativity truly blossoms. The other way that I write large sections of my novels is through #Writestorm sessions. These are amazing short power bursts of writing that I complete with other author friends, during which we race to write as many words as possible within a given time. The work I produce in these sessions is often quite rough and needs heavy editing, but this process allows me to get a large number of words down quickly. (The writestorm process is the brainchild of author Andy Mengel and is outlined in his book, available here: www.amazon.com/Writestorm-Create-Novel-Conception-Publication-ebook/dp/B0139V15T6/)

So, after my initial draft is written, my first edit begins. I wouldn’t dream of letting a real editor even glance at an early version, so instead I print it out and edit it myself on paper. Again, doing the work on real paper somehow allows me to see errors more easily and not get distracted by the screen flickering and e-mail notifications popping up. This is when I do my initial line editing changes, including picking up the ridiculous typos that I’ve made during writestorms!

I also try to pick myself up on the errors that I know I am prone to making: Starting every sentence with a proper noun or pronoun (I’m terrible for that…), lots of ‘looking’, passive voice, unnecessary detail.

Once my line editing is complete, I do the whole thing again. I start from the beginning and edit it through for overall plot consistency and to check it fits in with the timeline of my greater series (when editing my fantasy books). I tend to make errors to do with times of day, weather, etc and need to check for those. Sometimes I need to add new chapters or take out unnecessary chapters to improve the overall plot structure.

Then, when I’m happy with my version, it goes to my editor at Booktrope – the amazing Pam Harris. No matter how well I think I’ve edited it, she will still tear it to shreds! I pull my hair out, fret over things, lose sleep through anxiety, then finally actually sit down and make the changes. It is ALWAYS 100% better after the changes she has suggested. She does 2 or 3 passes over it and then, when we’re both happy with it, it goes to the proofreader.

Sophie Thomas – another amazing member of my team – reads it through, picks up anything we’ve missed and points out anything glaring that we have forgotten about, or been too close to the book to see. Then it’s finally ready! 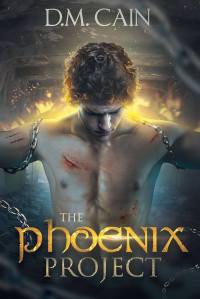 Britain has descended into chaos as violence and terrorist attacks seethe across this once-peaceful country. Outraged by the steady stream of lawlessness, citizens demand a harsher penal system, and the Phoenix Project is born.

In prisons across the country, inmates fight to the death in a weekly bloodbath while the nation cheers them on.

Raven Kennedy, a prisoner who has never forgiven himself for his unspeakable crime, struggles against his own guilt and self-loathing. But even as the real war wages on within himself, Raven is forced to battle some of the prison’s most ruthless killing machines. Can he survive long enough to unravel the anger and regret that shackle him—and one day find the forgiveness he seeks?

‘The Phoenix Project by D.M. Cain is a superbly written debut, soaked in tension and intrigue,’ Jack Croxall, author of the ‘Tethers’ trilogy.

D.M. Cain is a dystopian and fantasy author working for US publisher Booktrope. She has released three novels: The Phoenix Project – a psychological thriller set in a dystopian future, Soren – a middle-grade fantasy, and A Chronicle of Chaos – the first in a dark fantasy series. She is currently working on the next novel in the series, ‘The Shield of Soren’, and a novella to accompany it.

D.M. Cain is also a member of the International Thriller Writers and is one of the creators and administrators of the online author group #Awethors. Her short story ‘The End’ was published in Awethology Dark – an anthology by the #Awethors.

Cain lives in Leicestershire, UK, with her husband and young son, and spends her time reading, writing and reviewing books, playing RPGs and listening to symphonic metal.