Buy your copy from Amazon. 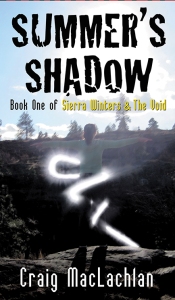 When seventeen-year-old Sierra Winters watches her physical body sink to its death, she realizes a shining silver cord connects her two halves together, but it breaks off from her bellybutton, sinks with her body, and then everything changes when a mysterious boy named Valeck saves her life.

Sierra soon discovers she has stumbled upon a mysterious realm known as The Void, which is filled with mystery, intrigue, danger and love. But upon returning to The Void, she is met by a sinister man known as Maven Kodiak who can manipulate his surroundings into a sickening Rot. Maven wants the power of her silver cord all for himself so he can enter the physical world and conquer it.

On the run from Maven, Sierra struggles to understand her abilities and powers which yield some surprising results. As she and Valeck fall in love, Sierra discovers he is keeping a vital secret from her.

Can Sierra be happy sharing her life between both realms, or will she be forced to choose one over the other forever?

Craig MacLachlan lives in Post Falls, Idaho, USA and is married to Christina. Craig’s passion in life is to tell stories. He started writing at a young age and reads books every chance he gets. His first completed Young Adult novel, SUMMER’S SHADOW, Book One of ‘Sierra Winters and The Void‘, a planned trilogy, is out now and available from online booksellers and high street bookstores by order worldwide. Craig is also working on a Young Adult horror novel and has two short films, “Roger” and “Marbles: A Love Story” he co-wrote with the director. Craig won third place in a one act screenwriting competition sponsored by the Maricopa County Community College District (MCCCD) Creative Writing Competition for 2011-12. Craig is also a story contributor for Young Adult Magazine as well as an article contributor for Zen Life. Craig enjoys, among others, reading, treasure hunting and exploring – and can also name all fifty states in alphabetical order!